Welcome to Maine – Vacationland. The great State of Maine means vacation to hundreds of thousands of visitors every year. Vacationers enjoy Maine’s rugged coast, mountain trails, river rapids, beaches, and lakes. Visit Maine for four-season recreation. There’s a reason the official motto was “vacationland” now #MaineThing is just the thing.  Be sure to explore all of Maine in MELiving. 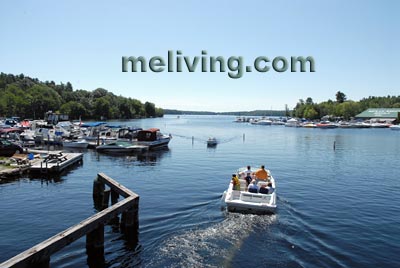 ME Lodging | ME Dining | ME Attractions

ME Real Estate | ME Events | ME Products | Classified

Visit Maine – from the northern rural Aroostook region to the visually breathtaking South Coastal region of Maine you will find a myriad of opportunities. Southern Maine is where you will find the urban hub, Portland, and major vacation destinations like Kennebunk, Ogunquit, Wells, Old Orchard Beach, and York. Maine’s Acadia National Park region offers such vibrant towns as; Bar Harbor, Eastport, Ellsworth, Calais, and more. In Midcoast Maine, Boothbay Harbor, Camden, and Rockland await your arrival. You will find the state capitol, Augusta, as well as Hallowell, Gardiner, Waterville, and other great communities in the centrally located Kennebec region. Contact us for information about promoting your business in New England Living Magazine.

A brief history of the State of Maine. The glaciers from the Ice Age helped to form Maine into what it is today. The glaciers are responsible for creating all of the islands and little harbors that Maine is famous for. As the glaciers melted many of the lakes throughout Maine were formed. The first inhabitants were Native Americans. Some of the earliest Indian Nations in Maine were the Micmacs and the Abenaki. The tribes currently residing in various locations throughout Maine are the Passamaquoddies, Penoscots, Micmacs, and Maliseets.

The Vikings are believed to have explored the coast of Maine a full 500 years before Columbus discovered the Americas. The first settlement in Maine was attempted in 1607 at Popham by the Plymouth Company. This was the same year as the Jamestown settlement in Virginia. The settlers of the Popham colony did not last long through the harsh Maine winters thus enabling Jamestown to be labeled the first permanent settlement.

Maine’s ownership and land disputes were an issue during Maine’s early years. During the French and Indian War, it was the French and the British who fought over who had claimed. Once the threat of attack from the Native Americans decreased Massachusetts, which had at that point had a claim to Maine, offered land to anyone willing to settle there. So, motivated by this offer Maine’s population doubled between 1743 and 1763.

Maine was an early participant in the Revolutionary War. When open warfare officially started Maine men joined the fight by the hundreds. After the Revolutionary War, many Mainers wanted to become a separate state from Massachusetts. The coastal merchants however did not want this. After the War of 1812 however, they realized that Massachusetts could no longer protect them from British raids. So, in 1820 Maine separated from Massachusetts and become its own state.

The land disputes in Maine did not end there. In 1839 Maine’s northern boundary with New Brunswick almost started a war. British and American troops were brought to the border. Major General Winfield Scott was able to form a temporary treaty that held until 1842 when the Webster-Ashburton Treaty finalized where the border would lay.

The coast has not been Maine’s only resource over the years. Many other natural resources have brought business to Maine. It’s many forests meant lumber and paper mills. Water-powered textile mills were built along the rivers. As well as granite and lime quarries being built.

Maine has helped to shape the history of the United States in many ways. Prohibition was one of Maine’s contributions. Neal Dow is considered the “Father of Prohibition” because it was under his leadership that Maine banned the manufacture and sale of liquor in 1851. Gradually the rest of the country followed and by 1920 there was a national ban on alcohol.

Since the later part of the 20th century, Maine has been maintaining a balance between its resource-based development and environmental protection. Tourism proved to be a perfect fit. It helps Maine’s economy without harming the trees or wildlife. People can come to Maine to experience all of the natural splendor. The miles of coastline dotted with lighthouses and fishing villages. The lakes and mountains with their splendor provide much to do for the outdoor enthusiast. So come and discover for yourself what makes Maine great.