Visit New Hampshire – the Granite State – any time of year. This beautiful northern New England state offers it all – the White Mountains, Grand Hotels, Award-Winning Golf, Ski Areas, and even ocean properties. The State Motto: “Live Free or Die” lives on in the land of low taxation (New Hampshire has no sales tax on most items) which means clothing, alcohol shopping bargains. New Hampshire travelers are welcomed by hundreds of outstanding inns, hotels, resorts, and campgrounds. Follow the links below for more New Hampshire Travel, Lodging, Dining, and Living Information from NH Living Magazine. 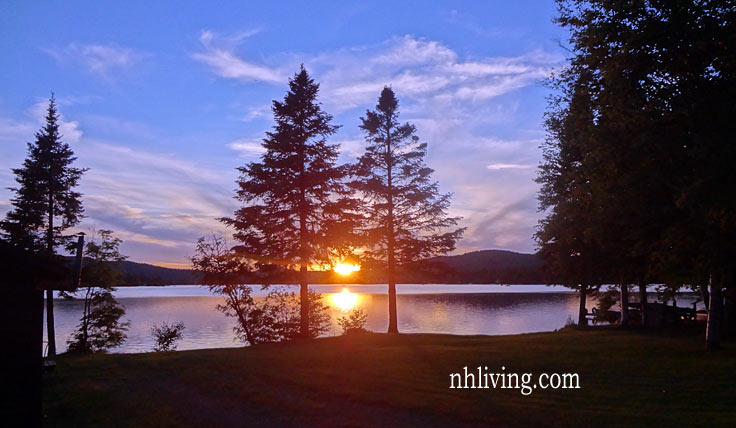 The seacoast prospered greatly due to the ports that existed there. New Hampshire’s first capital was Portsmouth. The inland areas of New Hampshire were settled largely by farmers who cleared small plots of land and built one or two-story farmhouses. As time went on this divide grew larger. New Hampshire was kept from breaking apart due to the legislative sessions that were held, mostly in Concord New Hampshire.

New Hampshire’s geography did not help the divide between the seacoast area and the rest of the state. Most of the rivers ran from north to south which in turn meant that roads and later railroads lead into Boston rather than Portsmouth. This meant that the majority of New Hampshire was affected far more by the activities in Boston than what was going on in Portsmouth. So, when Bostonians needed help during the Revolutionary War New Hampshire was there to offer aid.

New Hampshire’s economy changed during the industrial revolution with the textile mills that sprung up along the Granite State’s many beautiful rivers. Eventually, the mills moved to the southern states and New Hampshire worked hard on attracting other businesses to the area such as shoe and technology manufacturing. While mills were on the rise the small family farms were on the decline because they could no longer compete with the farms in the midwest.

In the 1800s the railroads that were used to bring food from New Hampshire south to cities such as Boston and Portsmouth began bringing artists, scientists, and sightseers north to experience New Hampshire’s beauty first hand. By the early 1900s New Hampshire was drawing visitors from all over the world to its picturesque lakes and mountains in the summer. The winter attracts many to ski the majestic white mountains to this day.